On the Surface of Things 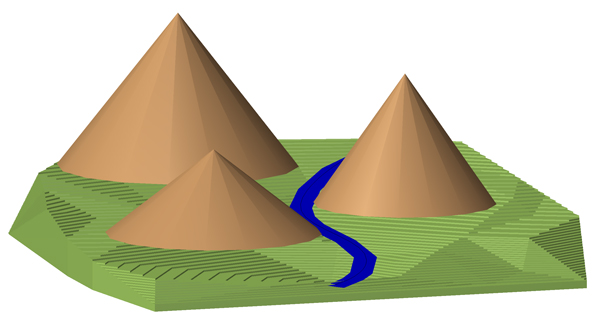 Ultimate authority and responsibility for surface water, through the Clean Water Act of 1972, belongs to the U.S. Environmental Protection Agency. This piece of legislation created the statutory platform for managing pollutants from point sources – identifiable and specific locations or operations – that have the potential to degrade surface waters. It also gave the EPA the right to set limits on how much effluent industry could release into surface waters.

How serious is the problem of surface water pollution?

According to the US EPA, it’s pretty serious. The EPA routinely assesses the quality of surface waters. Recent data from that agency suggests that more than 40% of assessed streams (based on miles of stream), more than 60% of lakes (measured in acres), and about 30% of bays are too contaminated to support swimming and fishing. Further, the EPA determined that less than 30% of the streams in the U.S. contain healthy biological communities compared to the best habitats in a particular region.

Surface water quality problems arise from many situations, and include things like runoff. Runoff is the portion of the moisture that falls to Earth and does not either soak into the ground, get used by plants, or evaporate back into the atmosphere. In the natural world, only about 10% runs off; however, in urbanized areas, more than half runs off, and takes with it oil, grease and metals from streets, excess lawn care products, toxic car care products, pathogens, and eroded sediment. Where does most of it go? Into storm drains that are routed right into the nearest stream. And there it wreaks havoc on the plants and animals that live there, both through direct poisoning and by reducing oxygen content. In sensitive environments like trout streams, excess sediment from fields and poorly managed construction sites, can become toxic, threatening fish populations.

Agricultural runoff has become a particularly pernicious problem. In fact, it is the single largest contributor to surface water pollution. Since the “chemical revolution” that resulted from World War II research, chemical fertilizers have been at the heart of American agriculture. Gone are the days when large farms produced “polyculture,” that is, a variety of crops to feed themselves, the livestock, and the community at large. Instead, large farming now depends on a primary crop, typically corn, that is rotated with things like soybeans, and a great deal of it goes to feeding hogs, cattle and chickens of “megafarms. “ It is a very large operation that is highly mechanized, from planting to harvest. It uses large quantities of fertilizers, herbicides and pesticides that are applied over large areas, often by plane. The portion of these chemicals that does not make it into the soil inevitably gets carried away into streams. But the production cycle doesn’t stop there; the crops have to be transported to markets all over the country, usually by large trucks that emit massive quantities of fossil fuel pollutants that reside in the air and fall into surface water.

Once the chemicals enter these streams, they become pollutants that alter the chemistry of the water and create a variety of cumulative and negative effects. Because our heartland is the home of large farming, much of the excess finds its way into the Mississippi River through its many tributaries. Today, the Mississippi River and the Gulf of Mexico contain excessive levels of phosphorus, nitrogen and organic pollutants. The fertilizer components causes algae to over-produce, leading to what is called “algal blooms.” When the algae decompose, it drastically reduces the amount of oxygen in water and produces a condition called hypoxia, or dead zones where the nothing can live. According to the EPA, more than 400 dead zones have been documented worldwide, including such important waters as the Chesapeake Bay, a vital fishery. The dead zone in the Gulf of Mexico is estimated to be the size of New Jersey, and that was before the oil spill of 2010.

Urban streams are a particular problem. Often, to control the width of the pathway the stream 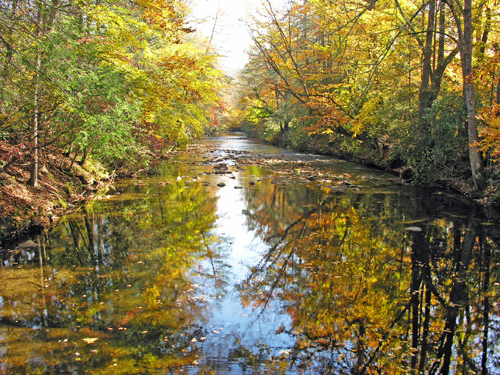 follows, streams are channelized. This is common in urban parks, where it is necessary to keep a stream from eroding adjacent private property. However, there is a cost. Straightening and piping a stream can produce an uneven distribution of energy along the stream during storms, creating major erosion, undercutting of banks, and clogging of downstream areas with sediment. The result is deeply eroded streams with deep, steep banks that are a potential hazard to passers-by and children playing along the stream. In short, they are often ugly and dangerous.

Wetlands are potentially the most sensitive of all water landscapes, and are, therefore, the most threatened worst in terms of surface water quality. Those areas of monotonous swampland in low-lying areas are our greatest environmental treasure. About one-third of all endangered species make their homes in wetland environments, and many more plants and animals uses wetlands during part of their life cycle or depend on them completely for survival.

In addition, wetlands are natural “water treatment plants.” The hydric soils and the bacterial and plant communities that reside in wetlands have a remarkable ability to extract contaminants and use them as food supplies, leaving the water clean. They also are excellent at capturing carbon dioxide, and assist in reducing the greenhouse effect. Wetlands are natural buffers that provide a significant degree of protection against flooding.

The problem in a nutshell: Wetlands are poorly understood, and are considered expendable. They are often destroyed and infilled for development. A classic case in point is Hurricane Katrina, which devastated New Orleans a few years ago. A large percentage of the land that was most affected by the flood had been wetlands that were drained and used for housing. These areas suffered profound damage, and represented thousands of acres that could have helped reduce the impact of the storm. Instead, thousand of people were displaced and the benefits of a large wetland area were not only neutralized, but were reversed. These areas went from an asset to a liability.

This has been a trend since America was first colonized. In our short history, more than half of all our natural wetland areas have been destroyed. That represents an unimaginable reduction in our most vital water and air protection systems. In recent years, we have been removing wetlands in the eastern United States at a rate of almost 60,000 acres per year.

How does this information benefit you? First, we hope it will help you better understand your relationship to this critical resource. Secondly, we can help if you are affected by negative surface water management problems. Northwest Geoscience is experienced in monitoring of industrial waste streams and natural waterways, and in restoration and management of urban streams and wetlands. We’d love to put our expertise to work for you.

Until he extends the circle of his compassion to all living things, man will not himself find peace.

What Our Clients Say

“Any time that one of our clients has reason to retain an environmental consultant to assist with an existing (or potential) regulatory issue Northwest GeoScience is one of the first names to my lips.  Over the years I have had the opportunity to work with all of their engineers and geologists on various projects.  Each of them are exceptionally accurate, knowledgeable and conscientious, especially as to the client’s end costs.  Northwest GeoScience is, simply stated, one of the best.”

Talk with an Expert

Have a problem that needs some answers before you can move forward?  Don't find what you're looking for here?  Please contact us.  We'll be glad to listen to your concerns and help you determine the next step.